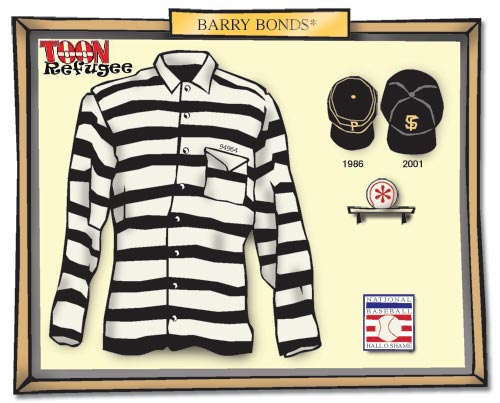 Apparently, Christmas is the season for sentencing – first and ex-governor and now an ex slugger. And once again, cartoons are the gift that keeps on giving. Here I’m recycling a cartoon from 2007 to mark the occasion of Barry Bonds’ sentencing for obstruction of justice.

Don’t miss my other Bonds Cartoons: 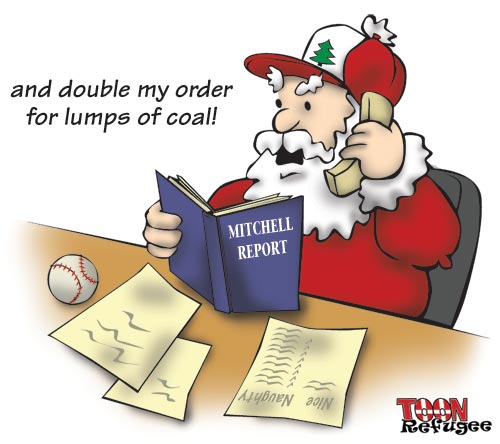 Our? tenth cartoon of Christmas this year was created for the MLB Rumor Mill over at Your SportsFix.com. 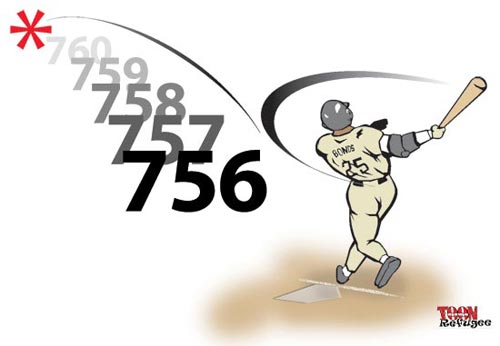 *Now that the chemically-enhanced, armored-elbowed Mr. Bonds has earned his asterick in the Baseball Hall of Shame, TOONrefugee proposes the addition of a new term to the baseball lexicon to describe his future home runs: BLASTERISK.

Barry Bonds failed a test for amphetamines last season and originally blamed it on a teammate according to a Daily News report.

It’s our way of celebrating Barry’s dubious accomplishments as he’s on the verge of passing Henry Aaron as the all-time leader in National League home runs (a few of Hammering Hank’s homers were in the American league so he’ll hold on to the overall record – at least for a while).

For those who miss the humor (or think we’re referring to Barry’s ego), an enlarged head is one side-effect of steroid and/or human growth hormone use. To the best of our knowledge there’s no known exercise program proven to develop scalp muscles.

And, on a serious note, thanks to Hank and Roger for memories that remain untainted even as MLB’s record book has begun to smell a bit over-ripe.

The Giants and Barry Bonds are hosting the All-Star Game. Just move the game a few miles north and the next time someone “goes yard” it’s the prison yard. 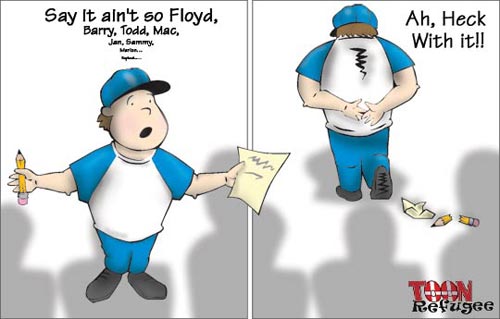 Are we overlooking the most important side effect of performance enhancing drugs? With the ongoing doping scandals in cycling, track & field, baseball, cartooning (just kidding on that one), etc., etc., it’s worth considering.

And, hey, I promise to get off the sports theme for at least the next couple cartoons.