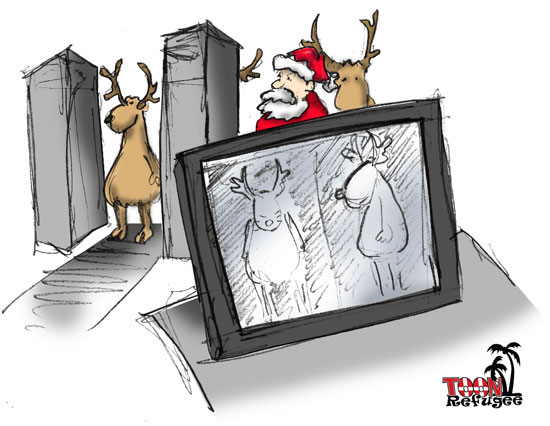 Traveling for the holidays?
Be sure to allow extra time for airport security. 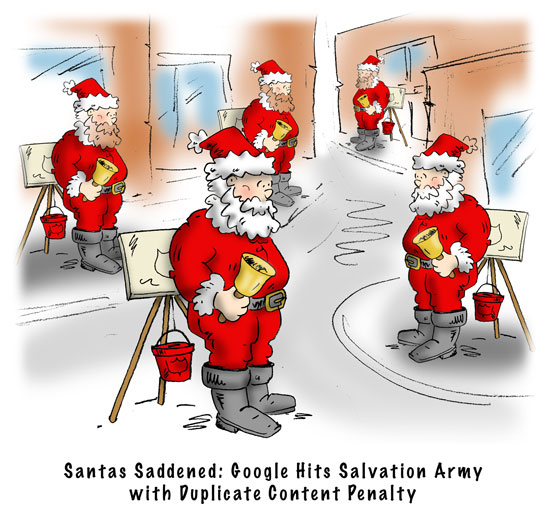 Update: As I said politicians, especially former Illinois governors are indeed the gift that keeps on giving. Three years after this cartoon was originally published, it’s timely again. As Blago has just been sentenced to 14 years in prison. one of the stiffest corruption-related sentences in Illinois history.

Illinois politicians seem to view the Governor’s office as “the gift that keeps on giving.” Fortunately, this year the FBI has a Christmas present for the citizens of the state: Governor Blagojevich all wrapped up and ready to drop down the chimney of one our federal prisons.

Twas the night before Christmas, and all through the house
I was hacking and sneezing and coughing lungs out.
The children were nestled all snug in the beds,
Still I was awake and feeling half dead.

And ma in her kerchief and I in my cap,
Had just settled down for a Nyquil-induced nap.
When out of my head there arose such a clatter,
I sprang from the bed to see what was the matter.

?Away to the mirror I flew like a flash,
Said ?Ahhhh? with a tongue the color of ash,
And what in my thundering sinuses appeared,
But nasal fluids green rather than clear.

And as pressure built and pain grew,
I knew in a moment it must be the flu.

With apologies to?Clement C. Moore and the squeamish among you.

It’s getting close to crunch time for Santa and this new sled should insure that he and Rudolph make this year’s deliveries on time. It’s also crunch time at TOONrefugee. Tomorrow is Christmas Eve and there’s still one cartoon to go in the Twelve Cartoons of Christmas. Be sure to check it out Christmas morning.

This one goes out to all my friends at the SEO Forum, SEOrefugee. You won’t find a better group of folks anywhere online.

This one’s for Tom Goering (aka NavyCS) at the Navy Blog for suggesting it and all the men and women in the Armed Forces who may be wondering if Santa will find them this year. Don’t worry, if you can land on a rooftop you can land anywhere.

BTW, Tom encourages us to support our folks in the military with a donation to the USO. It’s a great idea so here’s the link if you’re interested: Donate to USO