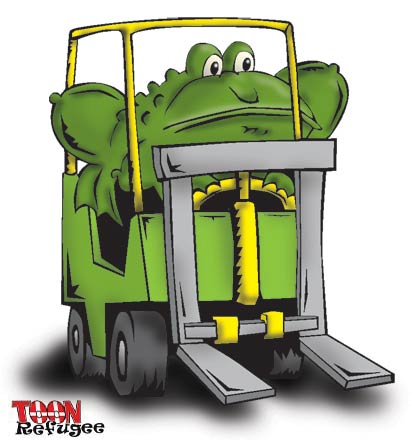 I’ve written a piece for the Co-Worker Hall of Fame over at Skitzzo.com. Here’s an excerpt:

I have especially fond memories of the time I spent working in what I?ll refer to (for reasons that will soon become clear) as the Pond. My job consisted of putting metal bases on cardboard tubes to create a carton. After I had created several of these cartons, I stacked them neatly on a palette and they were picked up be a forklift and taken away to be filled with road tar. The driver of the forklift was a large chap with an unfortunate resemblance to a toad. The forklift inevitably became known as the Lily Pad. The Toad mounted the Lily Pad at eight-thirty every morning, hopped off briefly for lunch and then reoccupied his perch until three-thirty in the afternoon.

If you’d like to read more, you’ll have to visit Skitzzo.com: Co-Worker Hall of Fame